Archive for the tag “Local Church” 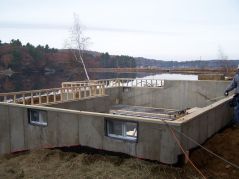 A few years ago our family fulfilled one of the items on my life-long bucket list: building our own house. Without realizing the plethora of decisions we would face, as well as the hours of sweat equity required to amass the equivalent of 20% down, we excitedly signed a contract and anticipated the day when the bulldozers would arrive and begin preparations for the foundation. It is hard to replicate the emotions I felt when the concrete was poured and the shape of our new home was visible from the road. But there is a fundamental theological principle that is illustrated in the foundation of a house. Important as the foundation is, it is not the house. Here is the application.

Consequently, you are no longer foreigners and strangers, but fellow citizens with God’s people and also members of his household, built on the foundation of the apostles and prophets, with Christ Jesus himself as the chief cornerstone. In him the whole building is joined together and rises to become a holy temple in the Lord. And in him you too are being built together to become a dwelling in which God lives by his Spirit. (Eph 2:19-22 NIV)

The foundation of my house without the structure built upon it was not a house. Who would ever pour a foundation and then stop building and move in? The same is true of the foundation of the apostles and prophets, even with the cornerstone in place. As foundational as the apostles and prophets – even a personal relationship with Jesus – are, they do not comprise the  household of God. The household is the church. It is not uncommon to hear people say that they love the Bible and they love Jesus, but they hate the church, so they will never be part of one. That is just like saying that I loved my foundation but hated the structure and would never move into one.

While the 120 believers were praying in the upper room, recorded in Acts 2, God did something miraculous. He visited them with power from on high and gave them the gift of the Holy Spirit. These empowered believers immediately began sharing the good news of the Kingdom of God with everyone who was present at the Feast of Pentecost. Consequently, Peter took that opportunity to share the message of the Kingdom, calling on everyone to repent, be baptized and receive the forgiveness of sins. Here is the punch line.

Those who accepted his message were baptized, and about three thousand were added to their number that day. They devoted themselves to the apostles’ teaching and to fellowship, to the breaking of bread and to prayer. Everyone was filled with awe at the many wonders and signs performed by the apostles. All the believers were together and had everything in common. They sold property and possessions to give to anyone who had need. Every day they continued to meet together in the temple courts. They broke bread in their homes and ate together with glad and sincere hearts, praising God and enjoying the favor of all the people. And the Lord added to their number daily those who were being saved.  (Act 2:41-1 NIV)

God did not tell these people that their personal salvation was enough. God built a house on that foundation and the people were formed into a new community. They then devoted themselves, together, to the Apostle’s teaching, to fellowship, to breaking of bread and to prayer. Further, the life of Jesus shone through them so that others were drawn to this community, resulting in the Lord adding to their number, daily, those who were being saved (2:47). Building on the foundation, God established his household. This new community had its roots in the Old Testament nation of Israel that had its origin in the family of Abraham. God formed Israel to be a light to the nations, a promise that began its fulfillment in Acts 2 and continues to this day. That fulfillment is visible in the local church.

May I say a few words about life in the local church? Sometimes it seems like I died and went to heaven when I experience the fellowship and mutual ministry in the local church. But other times, it seems like the fires of hell are about to consume me. There have been times when I was filled with so much joy and fulfillment that I never wanted the day to end. Other times, I couldn’t get to bed fast enough – only to discover that when I awoke to a new day, the pain and difficulties remained. I have been in pastoral ministry for 35 years now, and there have been many times that I approached the edge of a cliff and contemplated jumping off. But every time, I come back to this fundamental truth. When God decided to reach the world with the Gospel, he planted local churches!! He did not leave the foundation of the apostles and prophets without building the house. I have the incredible honor and privilege of leading God’s people in a local church.

May I give you a challenge? Are you actively serving God in a local church? Are you contributing to your church’s health? Maybe you have been hurt by church life, maybe you have been let down by a church leader – maybe by a pastor. There is no promise anywhere in the Bible that says that life in the community of believers will always be easy. But it is the life that God desires for every believer. Keep serving. Keep praying. Keep giving. A foundation without a house is not a house. In the same way, Christian faith apart from life in a local church is not a biblical faith.